I.B.M. plans to mount its most ambitious challenge in years to Microsoft’s dominance of personal computer software, by offering free programs for word processing, spreadsheets and presentations.

Skip to next paragraph 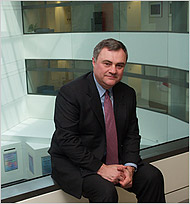 The company is announcing the desktop software, called I.B.M. Lotus Symphony, at an event today in New York. The programs will be available as free downloads from the I.B.M. Web site.

I.B.M.’s Lotus-branded proprietary programs already compete with Microsoft products for e-mail, messaging and work group collaboration. But the Symphony software is a free alternative to Microsoft’s mainstay Office programs — Word, Excel and PowerPoint. The Office business is huge and lucrative for Microsoft, second only to its Windows operating system as a profit maker.

In the 1990s, I.B.M. failed in an effort to compete head-on with Microsoft in personal computer software with its OS/2 operating system and its SmartSuite office productivity programs.

But I.B.M. is taking a different approach this time. Its offerings are versions of open-source software developed in a consortium called OpenOffice.org. The original code traces its origins to a German company, Star Division, which Sun Microsystems bought in 1999. Sun later made the desktop software, now called StarOffice, an open-source project, in which work and code are freely shared.

I.B.M.’s engineers have been working with OpenOffice technology for some time. But last week, I.B.M. declared that it was formally joining the open-source group, had dedicated 35 full-time programmers to the project and would contribute code to the initiative.

Free office productivity software has long been available from OpenOffice.org, and the open-source alternative has not yet made much progress against Microsoft’s Office.

But I.B.M., analysts note, has such reach and stature with corporate customers that its endorsement could be significant.

“I.B.M. is jumping in with products that are backed by I.B.M., with the I.B.M. brand and I.B.M. service,” said Melissa Webster, an analyst for IDC, a research firm. “This is a major boost for open source on the desktop.”

I.B.M. executives compare this move with the push it gave Linux, the open-source operating system, into corporate data centers. In 2000, I.B.M. declared that it would forcefully back Linux with its engineers, its marketing and its dollars. The support from I.B.M. helped make Linux a mainstream technology in corporations, where it competes with Microsoft’s Windows server software.

I.B.M. is also joining forces with Google, which offers the open-source desktop productivity programs as part of its Google Pack of software. Google supports the same document formats in its online word processor and spreadsheet service.

I.B.M. views its Symphony desktop offerings as part of a broader technology trend that will open the door to faster, more automated movement of information within and between organizations.

A crucial technical ingredient, they say, is the document format used in the open-source desktop software, called the OpenDocument Format. It makes digital information independent of the program, like a word processor or spreadsheet, that is used to create and edit a document. OpenDocument Format is based on an Internet-era protocol called XML, short for Extensible Markup Language, which enables automated machine-to-machine communication.

For example, an individual investor might create a spreadsheet with automated links to market information, and prices at which he or she wants to buy or sell shares in particular stocks. The person would get an alert by e-mail or cellphone message of price swings, and could create the document for a buy or sell order with a keystroke.

Or, in a doctor’s office, patient records could be linked to hospital, clinic and other databases and updated automatically.

Microsoft has the same vision of software automation, but it champions its own document format, called Office Open XML. Earlier this month, Microsoft failed in its initial effort to have Office Open XML ratified as a global technical standard by the International Organization for Standardization in Geneva. The OpenDocument Format, backed by I.B.M., Google, Sun and others, was approved by the standards organization last year.

I.B.M. clearly regards its open-source desktop offerings as a strategic move in the document format battle. “There is nothing that advances a standard like a product that uses it,” said Steven A. Mills, senior vice president of I.B.M.’s software group.

The Lotus Symphony products will support the Microsoft Office formats as well as the OpenDocument Format. But analysts note that technical translators are not entirely foolproof; Symphony software may easily translate the words from a Microsoft Word document, but some of the fonts and formatting may be lost. For many users, that may not matter, they say, but for others it might.

Betsy Frost, a general manager in Microsoft’s Office business, said users valued “full compatibility” with previous versions of their Office documents as well as the ease of use and familiarity of Microsoft products. And she noted that there are 500 million Office users worldwide.

Any inroads I.B.M. and its allies make against Microsoft, analysts say, will not come easily. “Three major players — I.B.M., Google and Sun — are now solidly behind a potential competing standard to Office,” said Rob Koplowitz, an analyst at Forrester Research. “But it’s a tough road. Office is very entrenched.”

Popular posts from this blog

Introduction Netty.io is a popular open source library that greatly simplifies the development of network applications on top of the JVM.  It abstracts the burden to deal with tedious low level details and allows you to concentrate on your business logic instead.  It is used by high profile companies like Red Hat, Twitter or Facebook and designed from the ground up to handle high throughput at low latency, even with thousands of connections at the same time. In this book, you are going to build both client and server using netty best practices, which are communicating with each other in a completely asynchronous fashion.  We are going to explore the netty pipeline, how you can reuse existing protocol handlers and how to write your own. Source code for book  https://github.com/trieu/netty-cookbook Table of Contents Chapter 1: Communicating in Asynchronous World with Netty (15 pages) Introduction Recipe 1.1 Building an asynchronous TCP server and client Recipe 1.
Read more

What is i2tree ? It's a framework for building personal information system with flexible schema. The philosophy design is "Freedom for Information Structure, Control Data Privacy", means the end-users like me,  and you can define what the information we can store, search, retrieve anywhere, anytime, and securely. How we get a source code https://code.google.com/p/i2tree/ How we see a web demo: http://tantrieuf31.byethost7.com/i2tree/index.php Thanks to the community Some Open Source Modules I used: http://codeigniter.com/ https://github.com/alexbilbie/CodeIgniter-OAuth-2.0-Server http://framework.zend.com/manual/en/zend.search.lucene.html http://code.google.com/p/reduxauth/ http://jquerymobile.com/ http://www.themegalaxy.net/  => appstore theme https://github.com/rgrove/jsmin-php/ http://maestric.com/en/doc/php/codeigniter_csv http://jquery.com/
Read more