Showing posts from September, 2010
Show all

The history of young Software Engineering is just in 65 years. Big Mainframe in big room ->  Personal Computer at your personal workspace ->  Mobile (Smartphone) in your hand -> ... Seem I have to back to 2004, when I first learn How to program for "computer" again. The Android phones, iPhone is just a kind of computer. Step 1: Find some textbooks, both printed and ebook. Step 2: Write down a Information Tree for easy learning  Step 3: Take a class lectures (Now I call video lectures on Internet) Step 4: Use the philosophy of IBM "THINK" means  READ - LISTEN - DISCUSS - OBSERVE - THINK Step 5: Do exercises, "Practice Makes Perfect" Cool Ebooks : Programming in Objective-C 2.0 (2nd Edition) Learn Objective-C for Java Developers http://www.wowebook.com/search/Objective-C/page/3
Post a Comment
Read more 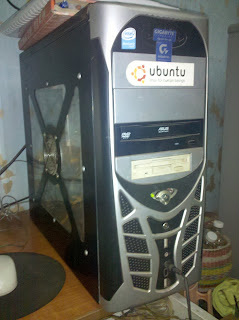 1)  On January 24, 1984 , Apple Computer Inc. (now  Apple Inc. ) introduced the  Macintosh  personal  computer , with the  Macintosh 128K  model, which came bundled with what was later renamed the  Mac OS   operating system . from  http://en.wikipedia.org/wiki/History_of_Mac_OS 2)  The first independent version of Microsoft Windows, version 1.0, released on 20 November 1985 , achieved little popularity. It was originally going to be called "Interface Manager" but  Rowland Hanson , the head of marketing at Microsoft, convinced the company that the name  Windows  would be more appealing to consumers. From  http://en.wikipedia.org/wiki/History_of_Microsoft_Windows => Nowadays, Windows OS is number 1. Thanks Mr.Gates. Without him, I can not study computing, because in 2002, I do not have money to buy the toys of Apple. The first PC, I assembled. Cool! 1)  In 1995 , the  AltaVista  is  launched , a  web search engine  owned by  Yahoo! . AltaVista was once one
Post a Comment
Read more